CGD is an inherited disorder, which means that it is passed from parents to their children.

One type of CGD is 'X-linked' (sex-linked) and the other four are 'autosomal recessive'.

But how does this genetic inheritance work exactly?

Around 65 per cent of people with CGD have X-linked CGD. Everyone with this type is male.

X-linked CGD is caused by an abnormality in the ‘X’ chromosome, part of the set of genes which determine a person’s sex.

This type of the disorder is also called ‘sex-linked CGD’ and it’s why there are more men with CGD than women.

How do males get the abnormality?

The CGD gene is ‘recessive’. That means it is only present on one of a woman’s X chromosomes. The other X chromosome contains the healthy gene which allows her to produce white cells that make chemicals known as enzymes that kill the microbes.

So women, with two XX chromosomes, can’t get X-linked CGD.

However, if a woman passes on her faulty X chromosome to her son, who will only have that one X chromosome, he will get CGD. There is a 50 per cent chance of him getting the unhealthy X chromosome instead of the healthy one.

Although girls don’t develop X-linked CGD, they can still be carriers. As mentioned above, if a woman passes her faulty gene to her son, he will develop CGD. If she passes it to her daughter, the daughter will become a carrier too.

A man with X-linked CGD can also pass his faulty CGD gene on to his daughter, making her a carrier. He won’t pass CGD on to a boy, as he’ll be passing on his Y chromosome.

Carriers seem to be prone to mouth ulcers and certain types of skin rashes. Depending on the degree of X-chromosome inactivation (lyonization, which percentage of cells behave as CGD or healthy), they may also be prone to infections.

This diagram below shows how a father with CGD passes on his defective X chromosome (*) to his daughters. But they don’t develop CGD as they have inherited a healthy chromosome from their unaffected mother. They do, however, become carriers:

This image shows how a carrier mother passes on X-linked CGD to her baby:

Defective genes on autosomes (other types of chromosomes aside from chromosomes which determine sex) also cause CGD.

People have two of each autosome in their body, including those with the CGD gene. One comes from their mother and one from their father. As long as one works normally, the person won’t develop CGD.

For a child to have autosomal recessive CGD, they must have two defective genes – one from each parent. 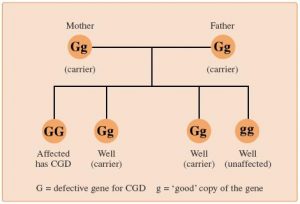 Distribution of the different types of CGD

X-linked CGD is the most common type of CGD:

Distribution of the different CGD proteins 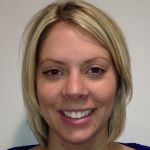 Lucinda Brown talks about how CGD is passed between generations and the options available to future parents. Listen here

Read more about having children.

Read more about the different types of CGD.