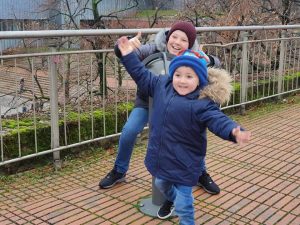 If you were to step into his classroom, you wouldn’t be able to tell five year-old Aydin apart from his friends - his cheeky smile, handsome brown eyes and smart haircut for school -  he is the picture of health and energy, though his parents tell a very different story…

Carly met husband Kadir in Turkey fifteen years ago. Early on in their relationship Carly shared with Kadir that she had been informed at 16 that she was a carrier of a very rare genetic condition called Chronic Granulomatous Disorder (CGD) following her brother’s struggle with the condition. As a carrier, Carly was aware that if she were to have a boy he would have a 50% chance of inheriting CGD and for a girl a 50% of being a carrier like Carly.

Kadir and Carly went on to marry and have their first son Murat (now 12), born without CGD. When seven years later they received the news that they were expecting a second boy, they were overjoyed but at the same time nervous about the high risk that he would be born with the genetic condition.

A blood test taken shortly after Aydin was born, confirmed that he has X linked CGD. 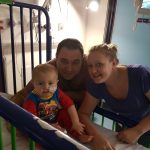 After processing this news, Carly and Kadir decided that they were keen for baby Aydin to start bone marrow treatment as soon as possible after birth.  Whilst medics advised that Aydin had a good chance of remaining well on prophylaxis medications for some years, Carly was keen to start the search for a Bone Marrow Transplant (BMT) donor as she had watched her brother suffer for many years as he is only now about to have a transplant in adulthood. Carly did not want to take any chances with her son’s quality of life.

Aydin and his parents spent the first week of his life undergoing numerous tests as well as being treated with high doses of intravenous antibiotics. It was here at Birmingham’s Heartlands Hospital that they first met Dr Hackett, Consultant in Paediatric Immunology – the person who would become central to Aydin’s ongoing treatment and recovery post-transplant.

The subsequent two years of Aydin’s life were characterised by frequent trips to Great Ormond Street Hospital in London – one of only two CGD centres in the UK, the other being Newcastle. Carly said: “From day on we wanted Aydin to go to Great Ormond Street after speaking with parents whose children had been treated for CGD and made amazing recoveries.”

Carly explained that they had a longer wait than other families to identify a donor owing to Aydin’s dual heritage, however, in October 2016, Aydin was admitted to Great Ormond Street for his BMT procedure. 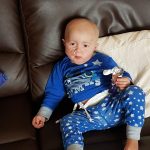 The CGD Society advise that no two children’s transplant journey is the same because of the nature of the preparation - days of exposure to chemotherapy followed by the potential for any number of complications as the body responds and adapts to the surgically implanted foreign cells.

In Aydin’s case, the chemotherapy did not appear to be affecting him at first, but five days in Carly began to notice he was losing his hair and his appetite, made worse by Mucositis - inflammation and ulcers around his mouth. Carly remembers how she and Kadir became fixated on Aydin’s daily blood test results, watching everything fluctuate dramatically and being in a constant state of worry and hope at the same time.

After 8 days of chemotherapy Aydin was ready for the transplant. On 28th October 2016 Aydin underwent infusion of cells lasted around 4 hours. On returning to the ward he was closely monitored with 1-1 nursing to undertake regular observations and ensure his body was coping with the transplant.

Carly and Kadir are extremely thankful for support received from Great Ormond Street during the three months they were resident with their son. As well as the specialist medical team, they received regular support from occupational therapy, play therapy as being confined to one sterile room 24/7 can feel both overwhelming and isolating at times. *

Carly’s advice for any parent embarking on a BMT with their child is to pack as many toys, books, magazines, activities as possible to help keep you both entertained and sane!  She also advised parents to accept any support offered by family and friends, because “you will need to take some time for yourself when you can. My husband and I would change places to ensure our sons were not missing either of us too much but being 150 miles away from my husband and family in a sterile hospital room 24/7 was emotionally tough at times. I really benefited from the rare weekends I spent back at home.”

Being able to get home enabled Carly to ensure she could have quality time with her eldest son Murat. She arranged for him to have some extra 1-1 support in school to help him cope with her being in London for extended periods of time and him worrying about his brother. Carly said they would often call Murat via face time so that he could communicate with his little brother, but that it was hard for him not to be able to visit (a condition imposed by the hospital to control spread of infection).

The family finally made it home with Aydin 10 days before Christmas 2016. Prior to discharge they had to disinfect the entire property including toys, soft furnishings, carpets etc.  Carly’s advice to other parents is to buy a storage box with drawers to organise the medications. Aydin required 18 different medicines to be administered five times per day. She had received two weeks of training around this regime in preparation for discharge, had a chart to follow and list of contacts to call in case she was worried or unsure. It was a huge responsibility, but Carly felt prepared and confident to undertake this.

The weeks and months that followed were not easy for Aydin and his family. He contracted numerous viruses and infections; and in the summer of 2017, Aydin had to be rushed to Great Ormond Street by ambulance after developing nephrotic syndrome which caused dramatic swelling to his face, hands and abdomen. This was the first case of this syndrome recorded in children who have undergone a bone marrow transplant for CGD and the medical team monitored Aydin closely. He was discharged home once more after 11 days of treatment at GOSH.

Once home Aydin continued to receive care at home from discharge nurses which impacted on family life as they had to ensure they were home and available for most of the day. Over time Carly learned how to undertake many of the nursing tasks to enable them to resume a more normal experience of family life. However, life would remain somewhat unusual for the next 18 months with visitors to the home being restricted and Murat having to remove his uniform and shower at the end of each day before he could say hello to Aydin in a bid to reduce the risk of infection for his little brother.

The first few outings with Aydin were nerve-wracking for his parents – they were mindful of advice given by the CGD team – they could take him out in his buggy with the rain cover on, only choose parks without ponds, woodchip or sandpits.

They had weekly, then fortnightly trips to Great Ormond Street by taxi (because there was too higher risk of infection from taking public transport) for check-ups on the progress of the transplant.

Carly and Kadir were anxious to receive confirmation that his immune system would be robust enough to start nursery. This was possible in April 2018 and they found Aydin loved the experience. He made friends instantly, but as expected, he caught every virus and bug going. Last year he contracted Chicken Pox but recovered far quicker than his peers because of the strength of prophylaxis drugs administered to him as a daily precaution. 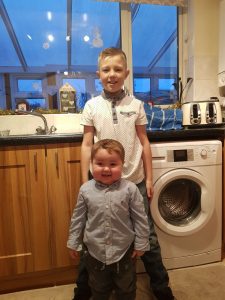 Today, three years and 4 months post-transplant Aydin has managed to progress from 18 types of medication to one – a daily dose of penicillin that he will have for life to support his immune system in fighting infection.

Aydin’s parents still need to remain cautious about places he visits and people in their network who might have infections and illnesses.

When asked about Aydin’s memories of his transplant journey, Carly shared that he doesn’t remember a thing which is what they all wanted for him and partly why they advocated for him to have the surgery as young as possible. Carly said that Aydin does not appear to have any concerns about attending hospital to see his Consultant Dr Hackett, telling his mother that he knows he is there to make him feel better. Carly said: “I know when Aydin is feeling poorly because he will ask to see Dr Hackett.”

Carly has shared a few pieces of advice for parents in the same position as her and Kadir during her interview for this feature, but shared that the most helpful experience for her was attending the CGD national conference in 2015 and 2018, post-transplant where she picked up a great deal of practical information – for instance that you can request that the GP flags your child’s records as ‘red’ for priority appointments if they have CGD ensuring that they will be seen as soon as possible on the day you call the practice. She also found specialists’ talks and updates on research into the condition and treatment were reassuring, along with peer support and knowing you are not alone in dealing with this extremely rare condition. In a bid to return the support she received from other parents Carly has kindly given CGD Nurse Specialist Helen Braggins at GOSH permission to pass on her details to speak to parents of newly diagnosed children should they have questions or be seeking advice/support.

Carly said that now Aydin is feeling well and enjoying life as a five year-old should, they are the most relaxed they have been since his birth. She added: “It has been a long journey for all of us – at times fraught with panic, despair and sleepless nights. When we look back we are so thankful to the staff at GOSH, Heartlands and the CGD Society who have helped to our son to overcome the condition and feel blessed to have a future together to look forward to and embrace.”

In September Carly will begin the 2nd year of her nursing course. She had previously worked in the care sector and embraced training around medical procedures required in Aydin’s care including maintaining lines into his veins, feeding tubes and all associated infusions and medication. For Carly, nursing her son inspired and encouraged her to embark on a career in medicine and help others in need.

Any cookies that may not be particularly necessary for the website to function and is used specifically to collect user personal data via analytics, ads, other embedded contents are termed as non-necessary cookies. It is mandatory to procure user consent prior to running these cookies on your website.