Alex Creamer (32) originally from Preston in North West England was diagnosed with CGD at the age of 4 after his parents grew concerned about swelling and pain in his stomach.

Whilst this rare and life-limiting condition blighted many aspects of his childhood and adolescence, Alex talks in a largely humble and pragmatic way about his experiences and joked that many of his friends and acquaintances were surprised when he casually announced his recent milestone anniversary as they had no idea of the trials he faced in childhood. 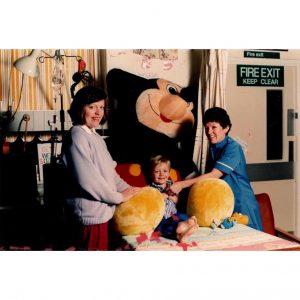 Children with CGD, especially 28 years ago, can struggle to get a diagnosis. Alex was treated by a consultant hematologist who, on discovering that the pain in his stomach was caused by an abscess on his liver, took biopsies but couldn’t understand the lab results until a newly retired colleague suggested that he test for CGD. Alex was treated in hospital for 6 weeks and discharged home with antibiotics to suppress the infection and symptoms of CGD that, apart from some gum infection, proved mostly successful for several years.

At eight years old Alex developed bowel problems similar to ulcerative colitis – a painful and debilitating bowel condition that would both affect his quality of life and general development as it reduces the body’s capacity to digest food and absorb necessary nutrients for health and growth.

Despite the pain and embarrassment associated with this condition Alex finished primary school and has fond memories of this period of his childhood. Unfortunately, the transition to secondary school was not as successful.

Coping with a bowel condition at any age is tough, though Alex found the impact of this on his health, growth and development made him a target for bullies and affected his confidence and wellbeing.

As a consequence, his parents decided to home educate him, later finding him a place at a small medical education provision attached to a local school. Whilst he did well academically, achieving good GCSEs, Alex on reflection feels that his illness robbed him of a normal adolescence.

At the age of 16 a serious infection proved the catalyst in Alex and his family’s decision to agree to a Bone Marrow Transplant. They met with immunology specialists in Manchester and at Great Ormond Street Hospital to discuss the procedure. Whilst it offered the hope of a curative outcome, the odds of failure were high because this was a rarely used treatment for CGD at the time.

Alex recalled: “The BMT decision was really difficult. It was a looming thing, massive, a really big deal… I had heard about other children who had not made it through. When I was told that BMT was the last option available to me I was with my parents and brother Adam and I broke down in tears. Looking back that must have been hard for my brother because he also has CGD and must have been wondering when the same might happen to him”.  Thankfully, Adam has managed his condition successfully and remains well today.

During the interview for this feature Alex talked often of the support and strength his family gave him throughout his experience of CGD and that they made the BMT decision together over 6-12 months. Alex attributes the happy and stable aspects of his childhood to his caring, dedicated and emotionally supportive parents and a grandfather who helped him take his mind off feeling unwell to focus on art – a passion that would become a career in later life.

It was Alex’s mother who trained to administer the intricate medical care he required at home over fifteen years. When asked about her experience of discovering she was a carrier of the CGD gene, Alex explained that not a great deal was known about the impact on female carriers of the condition and tragically his mother passed away ten years ago from a rare auto-immune condition that he believes was associated with her genetic condition.

Whilst the decision to embark on a transplant at 16 was leaden with risk, Alex was so ill that he could see no other treatment option being successful by the time he was admitted for the BMT.

Alex remembers working on staying mentally resilient by focusing on a goal. The medical team had advised that it would take around four weeks to recover post-transplant, so Alex fixated on an upcoming Manchester United fixture with Arsenal that he wasn’t prepared to miss. He did get home for the day to see his team lose on penalties but was back in hospital soon afterwards.

Alex remembers seeing a psychologist when he was in junior school, but was not keen to engage in this when he was going through BMT, though it was probably offered to him. He recalls: “At the time, just getting through the medical treatment was enough, having to go through it all in therapy seemed too much to tackle, though looking back it would have been a helpful thing to have done.” 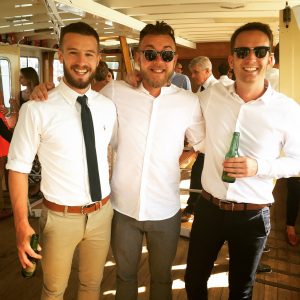 There were a few setbacks on the road to recovery post-transplant including an adverse reaction to an anti-rejection drug, which was then withdrawn but created a major GVH flare up in the gut. In total Alex was in hospital for 100 days. Although fearful that his body might reject the transplant, Alex was fortunate as an older transplant patient to benefit from a relatively experimental treatment (Photopheresis) at Rotherham Hospital on a weekly basis which supported his body’s recovery by ‘cleaning’ his blood with ultraviolet light.

Whilst he would find that he needed to take painkillers for the next 4-5 years, Alex reflects that it was at the age of 18 that his new life really began. He was able to use the skills he had honed in art and design whilst ill to enrol on a college course and then on to a subsequent degree in Graphic Design at the University of Central Lancashire.

During this time his health continued to improve year on year, as he got stronger and more independent. Moving out of home to study, widening his friend circle and ultimately doing many of the things he'd never felt comfortable doing before. The difficulties surrounding the initial decision to have the transplant were beginning to pay off.

On graduation Alex was offered an internship that launched a successful career in Graphic Design in Sydney where he remains today. Alex has taken the opportunities that the BMT has afforded him and his life has grown because of it. He now regards his life in two parts punctuated by a life-saving procedure that has enabled him to live like any other normal bloke his age. He isn’t obsessive about his diet, or exercise, he loves his work, has a circle of friends he couldn't live without and doesn’t look back.

When asked what advice he could give to other young people and their families facing the dilemma of whether to undergo transplant Alex felt it’s difficult to compare his own experience of having CGD with others’ particularly because 15 years on, BMT is now an established procedure for CGD with many more successful outcomes.  Also, the support and information available from the CGD Society and the nurse specialist now educates and informs that decision so much more than when he needed advice. However, he reflected that it was his family giving him perspective about the potential life opportunities he had ahead of him that helped him overcome the difficulties that at times threatened his chances of remaining strong.