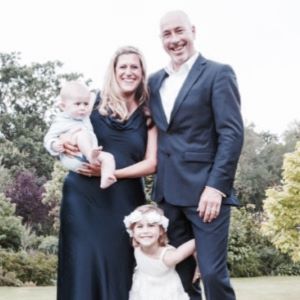 My name is Olivia Leigh and I am a carrier of XL-CGD. I was diagnosed as a carrier when I was three; my brother had CGD and my sister was not a carrier. My brother tragically died in 2009 after two failed bone marrow transplants. I am married with two children, one girl and one boy, and by some small miracle neither has CGD nor is a carrier of CGD.

My parents had educated me very early about being a carrier of CGD, so I knew I had to be very careful about getting pregnant. When I met my husband I spoke at length about having children with him and the slim to non-possibility of bearing him a son.

When I became pregnant with my daughter I was given no support. I was fiercely ill throughout my pregnancy until my baby was sexed at the 20-week scan. My relief that she was a girl was palpable. Afterwards, the CGD Society suggested I speak to someone about genetic counselling. Six months into my pregnancy I visited the nurses at Great Ormond Street Hospital (GOSH). They were fantastic and I was unbelievably saddened I had not been in contact with them before. They guided me through all my options, such as treatment from birth to help fight infections, bone marrow transplant and termination, many of which I already knew. But these were not needed as I was carrying a girl.

When I became pregnant with my second child I immediately contacted the team at GOSH and they responded within 10 minutes. It was so reassuringly brilliant. A blood test was set up for me at eight weeks to determine the sex of the baby. Everything ran so smoothly, I went for the blood test and received the results in two days. I was carrying a boy. As you can imagine I broke down, my world was turned upside down.

My life had been spent with a brother who had CGD. I had seen my brother grow up in and out of hospitals, be weak, be sick, be stoic and be amazing. I had been in the room when my brother, after two failed bone marrow transplants, died. I felt I could not bring a sick child into the world. The strain of my brother’s illness had destroyed my parents’ marriage, and I felt I had been neglected while they coped with his illness. I could not do this to my husband or my daughter. I did not want my daughter to experience the same childhood I had. Being a carrier can be very lonely. I have noticed that families concentrate often on the child with CGD.

The nurses at GOSH knew and understood my feelings. I had to register with my doctor and my 12-week scan was sent through. I was given a chorionic villus (CVS) screening test at St Thomas’ Hospital, London. The doctors and nurses there were aware of my situation and treated me very sensitively. They did a normal 12-week scan, then after numbing my stomach they used a long needle to draw cord blood from the placenta. Once this was done they showed me the blood and sent it off that day for testing. At this time I hadn’t told my relatives about my pregnancy.

Unlike the blood sample used for genetic testing, the cord blood had to be sent to the central genetics clinic, which is in Amsterdam. The timescale for finding out if my unborn son had CGD was two weeks. This was a difficult and worrying time for me, and the GOSH nurses emailed most days to check how I was doing and to offer help and support. While this was going on, it turned out that the laboratory in Amsterdam could not find my DNA. The GOSH team made many phone calls to try and track it down. Unbelievably they managed not to track down my DNA but my brother’s; they used that to match the mutation. After seven days of stress, Guy’s Hospital called with the results. I was given the answer within seconds; my son did not have CGD. At that point I broke down because I couldn’t believe it. I called the GOSH nurses immediately with the good news. I was now 14 weeks pregnant, carrying a healthy baby. I could finally tell my family.

The GOSH nurses, Lucie and Helen, were incredible; they were my family throughout one of the most difficult times of my life. They had briefed me on all my options, guided me throughout and helped with all the paperwork. I am so grateful to them for everything.

My top tips for CGD carriers

Please speak to your daughters about CGD, the possibility of them being carriers and the chances of them having a child affected by CGD. If this is difficult for you, then get help to do this. Be there for them, explain what you felt. Before you consider trying for a baby, speak to your medical team to get genetic counselling. Once you become pregnant, contact your health team. They will be with you every step of the way, whatever way forward you choose.

Read more about how CGD is inherited