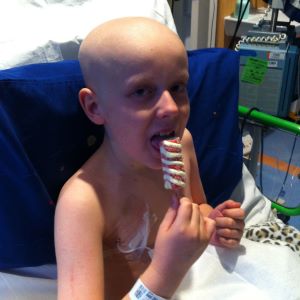 On 22 November 2011, Lou’s 10 year old son Alex was admitted to Great Ormond Street Hospital (GOSH) to have marrow from an unrelated donor to treat his autosomal recessive CGD. He spent 46 days in hospital. Alex now has 100% engraftment, meaning all the donor’s stem cells have settled in his bone marrow and are producing healthy blood cells. Alex is therefore cured of CGD.

Alex was first diagnosed with CGD when he was five years old. He had lots of gastrointestinal problems and severe infections involving long stays in hospital. Doctors first talked about him having a BMT in early 2008 but it was considered too high risk at that time because of the chemotherapy he would need and the fact that he’d need an unrelated donor – they offered only a 40 to 50% chance of success.

The family’s CGD consultant reopened the discussion about BMT in 2010 and Alex’s parents went back reluctantly to discuss options. Alex was eight years old, missing lots of school, poorly all the time, on steroids and had gastro problems. Doctors suggested a reduced intensity conditioning (RIC) approach [a milder form of chemotherapy] as an option for BMT because it would reduce the risks significantly.

“’Sick of being different.’ ‘I want to do normal things.’ These are things Alex used to say. He wanted BMT and he knew why. It’s been a rocky road to recovery and we were prepared for the worst. But after all of it, he is okay.

Alex’s doctors really made us face the stark reality of his health deteriorating further through puberty. In the end, there wasn’t much of a choice when we weighed up the risks versus benefits.  We were told that there was a 90% chance of success and that the effects of chemotherapy would be minimised with the RIC method.

But we were told that there risks were still involved, such as Graft versus Host disease (GvHD) [when cells from the donor (known here as the graft), recognises the host, ‘the patient’, as foreign. The reaction is caused by the donor’s white blood cells, lymphocytes, attacking and fighting the tissues of the patient], especially as Alex had been on steroids and had had gastro problems. In the end, Alex had no GvHD and the effects of chemotherapy were minimal.

We spent a year getting and keeping Alex well. This meant being extra cautious about keeping infections at bay and making sure he didn’t get overtired so he was in good shape. His steroids were reduced slowly over time.

In the lead up to BMT we had the chance to talk to the hospital’s clinical psychologist about our concerns. The CGD Society clinical nurse specialist, Helen, put us in touch with another family who had a boy about the same age with autosomal CGD who also had an unrelated donor BMT. It was really good to talk to someone who knew what we were going through.

We let our employers know and we were psychologically prepared but at that time, communication from the hospital to us wasn’t great. This didn’t help with our confidence in them and we started to have second thoughts. It also caused extra pressure and anxiety to keep Alex really well. There was a delay and we lost our original donor. So, we worked with the Anthony Nolan to find a new donor and had a big publicity campaign at the sailing event at Cowes. After we got a donor from Germany, it was all go.

Recovering from the transplant

The day of the transplant was uneventful. It was exciting knowing that the little bag of stuff was going to create magic but it was all over in about 30 minutes. It is just like any other drug or blood infusion. Once it was in, that was that. We just had to wait...and wait.

One of the main problems was not knowing about the practical logistics of it all. The time involved, what your responsibilities are in hospital, dealing with travel, the burden on yourselves. This was not really communicated to parents and came as a shock.

Alex had some vomiting with chemo but the worst thing was the mucocitis. This is when the linings of the entire GI tract, the mouth, tongue, throat and intestines, sheds like a snake skin. You can get huge blisters and have raw flesh. Alex had to be put on morphine and ketamine for two weeks to cope with the pain but the medical staff managed this wonderfully. He couldn’t swallow his saliva or clean his teeth. He couldn’t eat or drink so had to be fed through a central venous line [a white plastic tube inserted into a large blood vessel, a vein or in the wall of the chest, and used for giving medication or taking blood].

Alex also lost his hair after the chemo. It was traumatic for him and it took ages to come out, two to three weeks. It was like having pine needles everywhere. Eventually Alex decided we could shave it off and then he thought it was really cool.

As parents you get really tired. We found that it was 24 hours real non-stop graft. You need to wash, cook for and bathe your child, covering him in cream every day to keep his skin in good condition, minimise shredding and the risk of GvHD. You have to keep the room clean, strip the bed every day and remake it. You have to shower yourself, wash your hair every day and take a change of clothes in the morning and at night. So you need support from others to help with laundry and keep your spirits up. You get lots of support from other families on the ward.

Thankfully, it became obvious that Alex was recovering just days after the transplant. Getting the results – 100% engraftment – was just the best thing ever. We had seen Alex on a life support machine when he had CGD and was fighting infection and, in the end, were surprised how easy it was.

After the transplant, Alex needed blood transfusions and there was an unexpected reaction between the blood donor and Alex’s cells. The donor cells started attacking Alex’s blood cells because they weren’t completely compatible. This caused problems but was sorted out.  His Epstein Barr Virus (EBV) status was reactivated but is now under control. [EBV lies dormant in the immune system and can be reactivated when we get older. After BMT, it can produce an uncontrolled number of white blood cells, causing fever, sore throat and swollen lymph glands].

The recovery period after Alex left hospital took longer than we thought. This was the hardest bit. We felt the timelines given were based on the treatment of leukaemia rather than CGD. Not hitting the milestones at the times stated was frustrating and added to our worries.

We have not quite got used to saying ‘WHEN Alex had CGD’ just yet. He has a full head of blonde curly hair and is back at school full time; all of his CGD symptoms have gone completely. He is almost back to living a normal life but is is still on a few drugs to help his immune system, antivirals, antibiotics and immunoglobulin.

Alex has also grown about 7cm in height since we began the transplant. He says having a BMT wasn't as hard as he thought it was going to be and he is really glad that he did it. He is ready to stretch his wings and be truly independent after all the years of being watched over and restricted.

Next year, Alex starts secondary school, where he will be the same as everybody else and can join in everything – a whole new start.