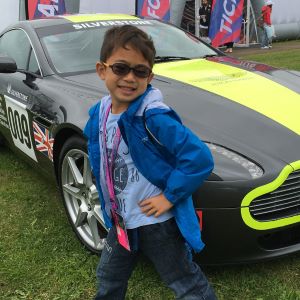 Jonathan had X-linked CGD and a BMT via an unrelated cord stem cell transplant to treat it on the 25th January 2013. He spent 63 days in hospital for his BMT procedure and now has 100% engraftment, meaning all the donor’s stem cells have settled in his bone marrow and are producing healthy blood cells.

Jonathan’s BMT procedure went very smoothly, however he developed acute and chronic Graft versus Host Disease (GvHD) and needed a long period of recovery. He is now four years post-BMT and almost ready to stop his steroid medicines. He has an additional medical diagnosis of bilateral glaucoma with impaired vision bilaterally, cataracts and hearing loss. Despite all this he is a very positive and growing boy.

Long periods of being ill

Jonathan has spent a considerable amount of time in hospital since his birth. He was diagnosed with CGD when he was six months old, in May 2007, at the John Radcliffe Hospital in Oxford. He presented with recurrent lymphadenitis (infection of the lymph nodes) and skin rashes, which were treated by antibiotics and antifungal prophylaxis.

Jonathan subsequently required further courses of antibacterial and antifungal therapy for infections in his lungs, liver and lymph nodes. In 2011 he went through periods of having high fevers and skin rashes and, in April that year, Jonathan had a lung biopsy, but this did not identify any specific organisms. In May 2011, he had more fevers, and a CT scan showed lung and lymph node infections and, subsequently, the bacteria actinomycetes were isolated from the lung. Another biopsy in December revealed two different fungal infections, and Jonathan had to have continuous intravenous antifungal and antibacterial medication. On repeat imaging in early 2012 there was evidence of disease progression, and Jonathan was admitted to GOSH in May 2012 for treatment with fevers and weight loss. His symptoms were treated with antibiotics and interferon-gamma without response, but steroid treatment helped. Unfortunately, he then developed recurrent pancreatitis, which was treated with total parenteral nutrition, a temporary pancreatic stent and washout.

The GOSH clinicians started discussing two treatment options for Jonathan in October 2012: gene therapy (GT) and BMT. This was when Jonathan’s general situation was better and the pancreatitis was stable. However, the fungal infections were out of control. As a ‘rescue plan’, we had to choose either GT or BMT to save his life at that time.

My wife, Amelia, and I were given three different options to consider: a cord blood 9/10 HLA match (matched with high resolution typing), an adult donor with an 8/10 match (2 mismatches) and GT using Jonathan’s own stem cells corrected using the new clinical trial vector.

The cord blood would be more prone to rejection and the adult donor more prone to significant GvHD. BMT could cure the CGD but with a high 10% to 20% risk of transplant-related mortality. GT could not guarantee to cure the CGD but could help improve Jonathan’s lung problems, and the mortality risk would be lower because his stem cells could be stored as a back-up if needed.

It was extremely hard for my wife and I once it was down to us to make the final decision. The consultants were very understanding and gave us enough time to research and consider everything ourselves carefully. We were offered the chance to meet all the consultants together to discuss all the pros and cons of the different options. We made the decision finally and it has proved to be the right one for Jonathan.

After a nine-month stay at GOSH, Jonathan came home for two weeks’ ‘rest’ over Christmas 2012. He was then officially readmitted to GOSH in January 2013 for his BMT. The whole BMT process went very smoothly, with Jonathan having only a non-neutropenic fever in day -1. He was very weak and tired though for the first couple of weeks because of the conditioning, and he began losing all his hair.

Challenges for Jonathan and us

Jonathan’s biggest challenge was to keep to the ‘no food by mouth’ rule for about eight months due to the pancreatitis and his specific transplant precautions. We tried to encourage him to be brave and positive and although the family was separated for such a long time, we all supported and encouraged each other. In fact, the BMT pulled all of us even closer.

Amelia and I were kept occupied with routine activities. We followed the timetable for medication, washing up, hospital tuition, play sessions, and so on. There are always good days and bad days at hospitals. The strict daily routine helped us all get through the difficult times relatively easily.

Jonathan tolerated his conditioning regimen reasonably well. He experienced mild mucositis, requiring codeine and then oral morphine. His mucositis resolved around the time of neutrophil engraftment. Jonathan’s temperature started to spike on day 40 and he was started on broad-spectrum antibiotics, and blood cultures were taken. He recovered very quickly from the spike and was finally discharged on day 63. He was so happy to go home but also sad to say goodbye to the doctors, nurses, play worker and teacher, all of whom had looked after him for nearly a year.

We felt a bit stressed and scared at the beginning of discharge because we had got used to the isolation room, but we quickly got everything arranged for our new routine at home. We kept in very good contact with GOSH and the local hospital to ensure that we knew where to go and for what should anything happen.

The ups and downs post-transplant

Jonathan quickly started to enjoy normal life at home. Unfortunately, he suffered acute and chronic GvHD a few months post-BMT. We rushed to the local hospital and were transferred to GOSH for immediate treatment. Thankfully we took immediate action each time, which helped Jonathan to get treated and recover quickly. Apart from the GvHD, Jonathan also suffered hearing loss owing to the drugs used to treat the line infection during BMT.

Jonathan is now four years post-BMT. He had a very long recovery post-BMT owing to the recurrent GvHD. He is getting stronger and healthier each day, and hopefully steroid treatment will be stopped soon. BMT has made a huge difference for him and our family. The treatment not only saved his life and cured CGD but also helped us all to have a brighter future.

Jonathan’s biggest achievement was winning WellChild’s Inspirational Child Award in September 2014. He met Prince Harry and appeared on TV, in newspapers and magazines and made himself a very ‘famous’ junior star thanks to his bravery. It was a fantastic experience, which not only built up his confidence, but also boosted the morale of the whole family.

He started one hour of home tuition straightaway after discharge, then attended school part time during Years 2 and 3. He finally returned to full-time schooling in Year 4. His positive personality helped him to make a lot of new friends. He enjoys a lot of challenges and activities in and out of school. He likes cooking, sports, games and telling people jokes to cheer them up! He is happy, funny and very confident although he still needs a lot of visits to the local hospital for blood and platelet transfusions and blood tests.

Our BMT experience also educated us to care for other people in need because we received a massive amount of support and encouragement before, during and after the BMT. We fully understand what the kids and families desperately need and feel. Jonathan was very proactive in getting involved in different charitable activities to help fundraise, such as the GOSH Bake Off. Nothing seems to stop him taking on new challenges and discovering the world now. The future is brighter and we are all looking forward to seeing his new achievements.

Ning’s top tips for getting through a BMT

It is extremely hard to decide between BMT and GT. However, once you have made the decision, try to think as positively as you can. This will help you through any difficult times. Remember, doctors can give you medical advice but it’s down to you to make the final decision. Think about all the pros and cons before coming to a decision and ask lots of questions.
Keeping family members close during the procedure can really help. Many charities can help to provide accommodation close to the hospital. Families whose children are in hospital far away from home can apply to stay at and use these facilities.
‘Routine, routine, routine’ makes a difference. Make a daily schedule, including washing up, mouth care, medications, hourly drinks, school classes, play sessions, and so on. The schedule helps to occupy your child and makes the stay in hospital a little bit easier.
Before and after discharge from your specialist hospital, make sure you feel comfortable about the medicines and care that will be needed to help your child recover at home. This is important for when you might need to use your local hospital. Make sure you can react quickly in the event of an emergency, such as a line infection or sepsis. If you need the local hospital, call them beforehand so they know what to expect and can respond more quickly. Finally, remember to telephone your specialist centre to update them on the situation, so that proper joined-up care can be delivered.